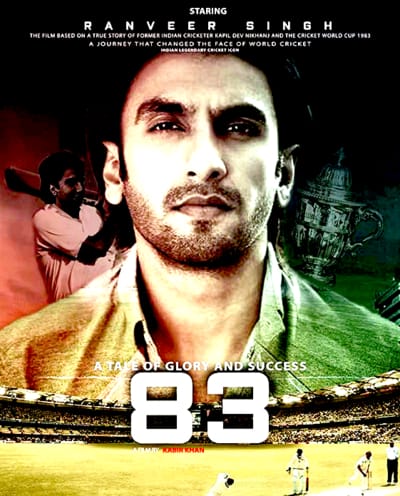 Finally wait is over because Kabir Khan has announced the release date of 83 . After much fake news, Ranveer Singh announces that he is doing a film based on the World Cup victory which came India’s way in the year 1983. Ranveer reviled it on the Kapil Sharma Show during the promotion of .

Ranveer Singh is very excited to be a part of Kabir Khan’s film. An it is a big opportunity for punjabi star Ammy Virk to be a part of such an extraordinary film. It is Ammy Virk’s Bollywood debut film. Till now he worked in Punjabi films which worked well at the box office.

It is based on the story of India’s incredible Cricket World Cup victory win in 1983. Kapil Dev was captain of the Indian cricket team and Balwinder Singh Sandhu helped India by taking wickets.

The first look of the poster looks pretty similar to ’80s. Ranveer Singh playing on the background of the poster and on the other side you will see World Cup. We can see Kapil Dev bowling at the bottom and is limited audience in the stadium. We can see a tag line “A journey that changed the face of World cricket”. This film is based on a true story of former Indian cricketer Kapil Dev Nikhanj and the Cricket World Cup 1983. Catch 83 movie trailer now and watch 83 online with Amazon prime.