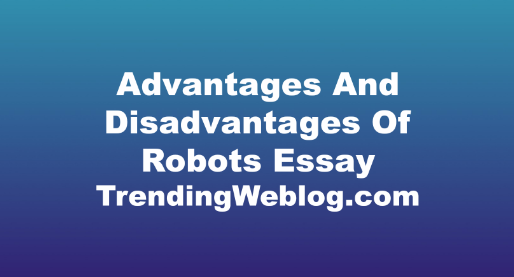 Intelligent machines such as robots are widely deployed to do the works of human beings. Discuss the advantages and disadvantages of robots essay writing task. The efficiency of the workplace improves amazingly with the help of intelligence machines. Robots, known as steel-collar workers, are widely employed in different fields such as marine research, space exploration, and some modern assembly lines. Robots undoubtedly bring about advantages though they are not as versatile as expected.

The advantages of robots are innumerable. The employment of robots on assembly lines saves labor forces. In addition, they work accurately and tirelessly. That is the reason why they are used popularly in automobile and electronic production line.

Another merit is that robots can take the place of human beings and work in dangerous environments that are not accessible to us. Human beings have extended their cognition to the outer space where there are unpredictable dangers. Robots can work in any kind of situation, no matter how awful the environment is. In the hospital, robots work as professional doctors doing the operation on the patients. Furthermore, robots can work around the clock, never knowing what tiredness is.

However, the disadvantages of robots are undeniable. Firstly, all the robots and other intelligent machines are designed by human beings. What robots do is to follow the instructions and pre-set programming by human beings. If there is something wrong with the electric circuit or programs, robots will become good-for-nothing machines. Besides, robots cannot work creatively when confronted with the complicated situation. In short, robots are subsidiary to human beings. However competent they are in various kinds of field, robots will never take the place of human beings and will not play a decisive role in our work and life