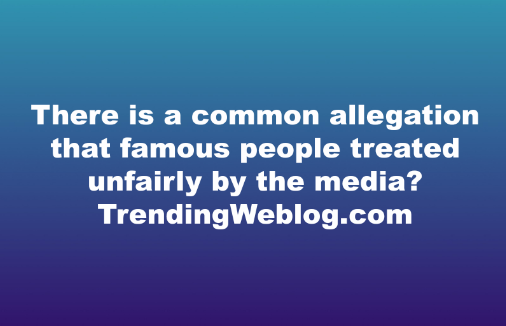 Are famous people treated unfairly by the media Essay – Are famous people treated unfairly by the media

The relation between celebrities and media is, in fact, an ambiguous one. While some people claim that it is the media that gives birth to celebrities, some others claim that the intrusion of media into the private lives of popular figures cannot be justified. In my opinion, the media should be more sensitive towards peeping into the lives of famous people.

It is an accepted fact that in the modern scenario, media has grown omnipotent and omnipresent. It has the power to elevate anyone to the zenith of publicity instantly and to dethrone and push him into oblivion in the next moment. It has become almost impossible to be famous without the active aid of media. Hence, in the present-day world, there is a close association between the media and the celebrities like film stars, sportspeople, and politicians. Media keep these people in limelight and keep the public curious about them, and, as a reward, they take away the personal details of the famous people to quench the curiosity of the public.

However, things take an ugly turn when media resort to exposing something explosive that tarnishes the image of a celebrity. It is ironic to notice that even the media employ specialists to closely monitor the activities of celebrities. A few years ago, a celebrity lost her life in her attempt to escape the clutches of paparazzi. It is a matter of concern that media is chasing famous ones for anything sensational like a nude photo, an illicit affair or any other illegal activity. There are instances of celebrities manhandling media persons because of unwanted questions.

In total, media should realize the fact that its main function is not to produce ticklish news that quenches the thirst of the public. It must provide all news with equal importance respecting the privacy of everyone.