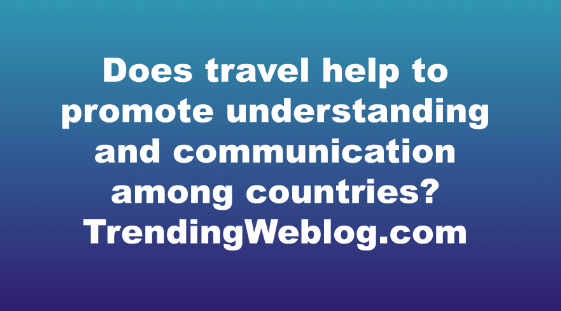 Does travel help to promote understanding and communication among countries – Do you agree with this statement. Write an essay of 200 – 300 words.

Does travel help to promote understanding and communication among countries It is rightly said that the world is a book and those who do not travel read only one page There is no better way than to travel around if one likes to see places, people and lifestyles. Thus, one can undoubtedly say that travel improves communication and cooperation among people.

To begin with, most prejudices people hold about the population of other geographical areas are the result of lack of proper knowledge. For example, even within a country like India, people of a particular area are considered hardworking while those who belong to some other areas considered lazy. Some are short-tempered and some are considered gentle. A close examination will prove that these all claims hold no water. Thus, visiting places provides a chance to remove misconceptions about peoples.

Another benefit is the spread of culture and languages. While travelling to other places, people learn the languages and cultures of other people. This enables them to break the barrier of language, thereby improving communication. Yet another advantage is that the movement of tourists from one country to another country boosts the economy of the host country. Thus, tourism becomes a way of living for many.

From the above analysis, it is clear that travelling is one of the best ways to enhance communication and thereby cooperation among countries.