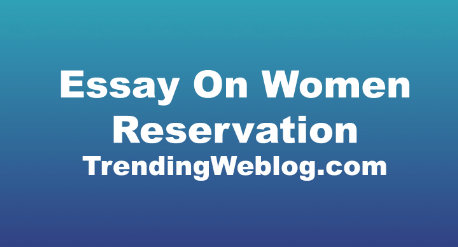 Essay On Women Reservation – Most high-level jobs are done by men. Should the government encourage a certain percentage of these jobs to be reserved for women? Essay On Women Reservation in English

Even in this twenty-first century, the discrimination females face in the workplace is alarming. The number of females in senior management positions is far less than the number of males. The reason behind this trend may be the deep-rooted prejudice in the society that females are both physically and mentally inferior to men. In my opinion, the criterion for selection to higher level posts should never be sex.

In most societies, females have been assigned the role of a homemaker since the dawn of human civilization. As a result, they are considered unfit for jobs that involve the responsibility of management and supervision. So, there is a strong argument that females are not suitable for higher level jobs. Even in western societies where females enjoy almost an equal position to men, the number of females in higher level jobs is less. So, one cannot conclusively say that the reason is discrimination.

It is rightly said that giving reservation on any basis; caste, creed, color or sex, will have a negative impact on the growth of any nation. For example, more skilled and experienced may get disqualified if gender is a criterion for reservation to higher posts.

Moreover, higher level posts require a lot of personal abilities and willpower. Selecting a person who is not capable of handling that position on the basis of reservation seems an utopian ideology.

Hence, in my opinion, there should not be any kind of reservation whether it is on gender basis or on the caste basis at the higher levels jobs. The job should be given to the ones who are worthy irrespective of gender.