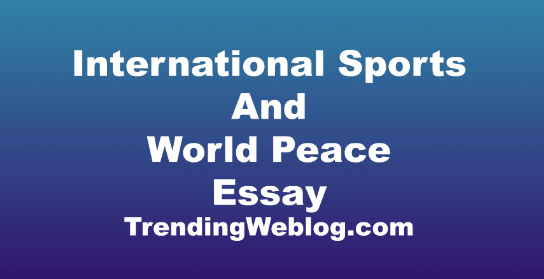 Popular events like the football World Cup and other international sporting occasions are essential in easing international tensions and releasing patriotic emotions in a safe way. Do you agree or disagree? Readout International Sports Events Help In World Peace Essay. World sporting events assume a greater responsibility than most people would believe. Though the main purpose of sports is to provide entertainment and to maintain physical health, these days, they play an important role in maintaining peace and harmony among nations.

It is a fact that true sportsman-spirit wins over all other feelings. Most sports-lovers forget all their problems while watching a sporting event. Even they forget to engage in criminal activities. They forget the boundaries of region and religion. For example, the Argentinean Football team has fans throughout the world. During Football World Cup, they wear the jersey of Argentinean Football team and celebrate their every win. This shows that nation and religion have less influence than sports. Moreover, the competition brings families and neighbors together and even rival gangs watch the games and celebrate peacefully.

Similarly, there are countries which are fuming with internal civil war. For example, India has a high rate of unemployment, lack of education, hunger, crime, poverty, and corruption. In addition, there is regionalism and religious extremism playing havoc by dividing people into thousands of groups. However, the event of Cricket World Cup helps create a feeling of unity and patriotism in the minds of Indian people. As Indian Cricket team is considered one among the best in the world, every Indian feels proud of their country.

However, there are instances when sporting events, instead of improving relations, worsened the situation through events like players of one country getting abused and manhandled in another country. It was not long ago when a famous football player was brutally murdered for causing failure of his own team. Such event, though very rear, prove that there are mindsets which cannot be altered by sporting relations sed and famous football player was s, though events very rare, prove that there are mindset’s which cannot be alternative by sporting events.

In total, it can be said that in the modern world, sports have an undisputable role to play in keeping international relations smooth.