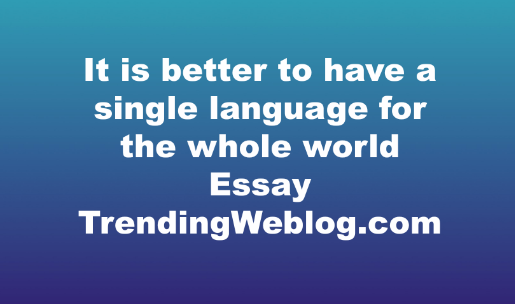 It is better to have a single language for the whole world. Do you agree or disagree? Write an essay of 200 – 300 words. There are thousands of languages in the world. While most languages are used regionally, only a handful of them are recognized internationally, the most prominent one being English. It seems wonderful though uncanny proposition to have a world with a single language for communication.

The benefits of speaking a single language throughout the world are plenty. The first and foremost one is the ease in communicating or transferring information from one part of the world to another. The time-consuming processes of translation will no longer be required, and the new inventions and studies of the western world will be easily accessible for the other parts of the world. Thus, no doubt, this will give a boost to education in poor nations.

Yet another striking feature is that this can lessen many these days. To illustrate, people in one part of the world may have some misconceptions about the people of yet another part. If there is a common language, it will lead to improvement in communication, which eventually results in better mutual understanding and respect.

However, looking into the negative side of the issue, one can easily say that this will lead to assimilation and disappearance of cultures. Yet another allegation is that the language used in an area is largely dependent on the geographical features and culture of that area. So, if they use another language, there will still exist a huge difference in the dialects, idioms and other usages which will make it difficult for outsiders to understand. A perfect example is the English used in different countries.

In total, it is certainly beneficial if there is a single language for communication around the world. However, as language often relies heavily on metaphors, similes, and colloquial expressions, people may find difficulty understanding each other despite the presence of a common language.