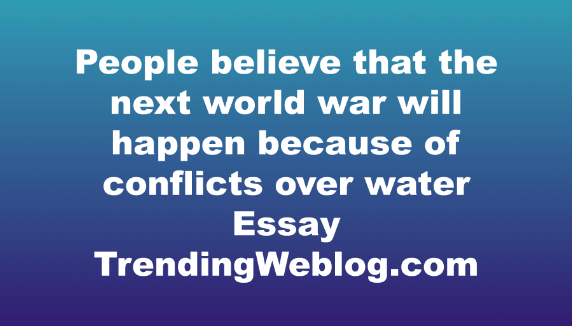 People believe that the next world war will happen because of conflicts over water. Is this fear justified? Are you agree with this statement? Write an essay of 200 – 300 words. The importance of water in human life beggars description. Life originated in water and no living organism can survive without water. Thus, we can say that water is an essential requirement in life. So, the assumption that the next world war will be for water holds water.

It is a fact that two-third area of the globe is covered by water, though not in consumable form. However, the amount of drinkable groundwater is declining at an alarming rate. This is mainly because of the increase in world population and due to an increase in per capita water use. Yet another factor leading to the water crisis is the erratic climatic changes witnessed these days. While some parts of the world are getting drier and drier, some other areas are getting inundated by rising sea water.

As a result of such changes, conflicts on water issues among countries and states have become a common phenomenon these days. Fights for possession of water sources and sharing of water are a part of everyday news now. It has been estimated that the time is not far when a huge proportion of the world population will have no access to fresh water.

Now, it becomes almost certain that the most valuable thing in the future will be water, and hence, it is highly likely that even wars can take place for its possession.