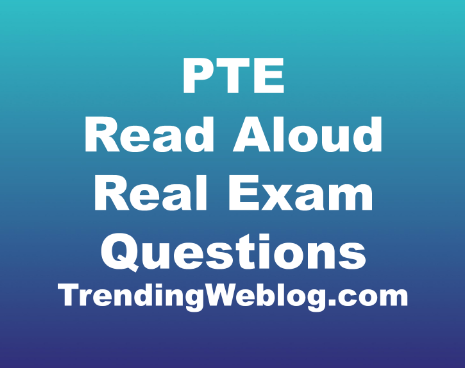 PTE Read Aloud Real Exam Questions – Practice PTE exam questions. In this post, we share the questions for your practice.

Engineers call the new technique “feed extended drilling.” It works by pushing the drill bit inches past the stabilizer bars that keep the rover steady. NASA says the new technique works more like a human leaning on a wall to steady themselves as they work. NASA’s Curiosity rover successfully drilled a 2-inch-deep hole in a target called “Duluth” on May 20. It was the first rock sample captured by the drill since October 2016.

Of the abdomen is used to find whether any organ is enlarged and similar (assessing for organomegaly). It is based on the principle of setting tissue and spaces in between at vibration. The sound thus generated is used to determine if the tissue is healthy or pathological. There are three main medical percussion sounds: resonance (heard over lungs), tympany (heard over the air-filled bowel loops), and dullness (heard over fluid or solid organs).

Farming is a large-scale practice in the temperate regions (except for Boreal/Subarctic regions) due to the plentiful rainfall and warm summers because most agricultural activity occurs in the spring and summer, cold winters have a small effect on agricultural production. Extreme winters or summers have a huge impact on the productivity of agriculture.

This is a concise presentation for medical students. A growth chart is also known as the road to health chart. It was first designed by David Morley which was later modified by WHO. Growth Chart is a visible display of the child’s growth and development. It is also very useful for growth monitoring.