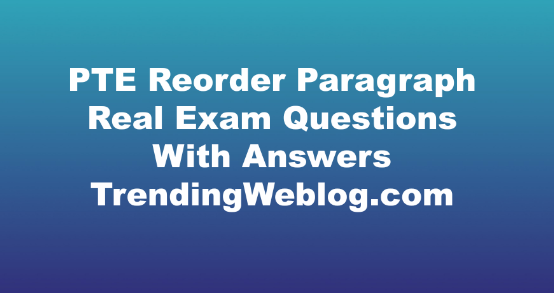 PTE Reorder Paragraph Real Exam Questions – Solve each re-order question in two minutes. The answer will follow with the explanation after each question. A) Although traditionally focused on ancient Greece and Rome, the study now encompasses the entire ancient world, thus expanding their studies to the entire world.

B) Classics or Classical Studies is the branch of the Humanities dealing with the languages, literature, history, art and other aspects of the ancient world.

C) One of the most notable characteristics of the modern study of classics is the diversity of the field.

D) Traditionally, classics were essentially the philology of ancient texts.

A) But Ken spent most of his time eating and sleeping.

B) Once famine struck the village. All the crops failed. Three clever friends asked Ken multiple times to leave the village, but he was too lazy to move.

C) Once upon a time in a small village lived four persons named John, Phillip, Ken, and Leroy.

D) They had grown up together to become good friends. Among them, John, Phillip, and Leroy were very knowledgeable.

A) One day Aphrodite jealous of the beauty of the earthly princess, Psyche, ordered her son to make the princess fall in love with the ugliest man on earth.

B) Eros set out to do his mother’s bidding, but when he saw Psyche fell in love with her himself.

C) He was a blond and playful winged youth, armed with a golden bow and arrows. Whoever he shot at immediately fell in love.

D) Eros was the son of Aphrodite, goddess of love, and was always at her side to assist her in her matchmaking endeavors.

A) She couldn’t do it on her own so she pleaded his case with Zeus, the supreme deity.

B) But while Eos being a goddess retained her youth, Tithonius began to age.

C) Eos, Goddess of Dawn fell in love with a youth named Tithonius, and the two spent many happy years together.

D) He asked his beloved to grant him immortality.

1) C (Introduces the story between Eos and Tithonius)
2) B (It becomes second because tells about the twist in the story)
3) D (He stands for Tithonius, asked Eos to bless him)
4) A (Further development in statement D)

A) But in the case of a for-profit health funds, there’s a third factor: continuing to make enough profits to pay adequate dividends to investors or overseas owners.

B) Every year, health funds submit a request to the Commonwealth Minister for Health to change their premiums (rates), known by most members as the rate rise.

C) If the for-profit one is unable to justify exactly why they need to raise their premiums; the Minister may reject the claims of health funds.

D) With rising costs, health funds need to continue to increase their premiums to continue fulfilling their obligations to members.

1) B (It comes first because only this statement tells basic about health funds)
2) D (It tells further about costs of health funds)
3) A (It talks about a for-profit health funds, it fits at third place because it won’t fit anywhere else)
4) C (It summaries the story of health funds binding it all together)