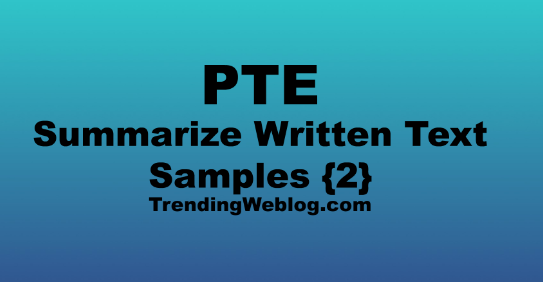 In this article, we provide quality PTE Summarize Written Text Samples. In this question type, you are given a passage to read. Then you have to summarize the passage in one sentence comprising 30-40 (not more than 75) words in 10 minutes. # After reading a passage, write a one-sentence summary of the passage.

Compulsory voting is often suggested as a solution to the problem of declining turnout. But how are individuals and countries affected by compulsory voting beyond boosting electoral participation? Shane Singh investigates the social, economic, and political consequences of compelling citizens to vote.

There has been a lot of discussion about compulsory voting these days. In the United Kingdom, in particular, as voter turnout rates have declined, many commentators and politicians have begun advocating for mandatory electoral participation. Those in favour of compulsory voting often adduce the importance of participation among all segments of society. Citizens of democracies are forced to do many things in the interest of the public good, they maintain, including serving on juries and educating their children, and full participation serves the country as whole. Those opposed to compulsory voting often argue that, from a democratic theory perspective, the right to vote implicitly includes a right not to vote.

Such a right of abstention, they argue, is more important than any societal good that might accompany high turnout. In fact, opponents of compulsory voting often contend that the country may be better off if those who are disinclined to vote are not pushed to participate in public affairs. Regardless of whether one of these sets of arguments is more persuasive than the other, compulsory voting is commonly used around the world. Several European democracies mandate voting, as do Australia and most of the countries in Latin America. By evaluating results from these countries, it is possible to assess the mechanics and effects of compulsory voting.

Compulsory voting, as seen in Europe in Europe and Australia, may gave various economic, social and political consequences, forcing the citizens to vote in favour of public good; however, opponents ponder that the right to vote includes right of abstention and argue that the nation would be better off, if citizens are not pushed to indulge in public affairs.