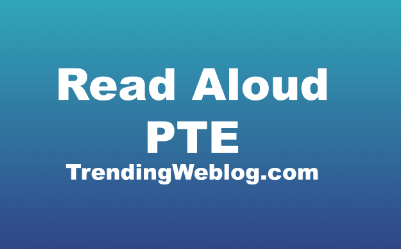 Today we will work on one part of speaking – read aloud PTE. Look at the text below. In 40 seconds, you must read this text aloud as naturally and clearly as possible. PTE read aloud practice is a long answer item type that integrates speaking and reading skills and requires test takers to read a short text aloud, using correct pronunciation and intonation.

Task
A text appears on the screen. Read the text aloud.

Prompt length
Text up to 60 words

Time to answer
Varies by item, depending on the length of the text.

“Modern science says: ‘The Sun is the past, the Earth is the present, the moon is the future.” From an incandescent mass we have originated, and into a frozen mass, we shall turn. Merciless is the law of nature, and rapidly and irresistibly we are drawn to our doom.”

Bill Gates used to be so addicted to Minesweeper, he used to sneak into a colleague’s office after work to play, because he uninstalled it on its own computer because he was playing it too much. Now check Bill Gates net worth. He is the richest man in America and second richest in the world right now. For what are you waiting for, go online and start playing Mine Sweeper. Just Joking.

I wish you had mentioned Joaquin Phoenix because we are going to be hearing a lot about him this awards season. And it’s going to sound blasphemous, but he deserved an Academy Award for Gladiator even more than Russel Crowe. And the thing he and Casey Affleck pulled off with their “I’m still Here” project is literally art transcending life.

Shadows that are in plain view yet hidden, waiting to pounce on fear. Crawling silently among us. Releasing poisons of deceit and hatred for purity. Shadows that saw and grow in power. It’s chaos on phone and consumes the world. The worst nightmares haunt us where we feel safest at home.

By using galaxies as giant gravitational lenses, an international group of astronomers using the Hubble Space Telescope have made an independent measurement of how fast the Universe is expanding. The newly measured expansion rate for the local Universe is consistent with earlier findings. These are, however, in intriguing disagreement with measurements of the early Universe. This hints at a fundamental problem at the very heart of our understanding of the cosmos.

Analyzing campaign speeches is difficult because it often is hard to obtain transcripts of speeches. It is possible to generate reliable transcripts from video using automatic speech recognition (ASR) systems, when the speech took place in a quiet environment. But researchers opted not to use today’s automated methods because they were likely to introduce errors in the noisy environment of campaign rallies.

Every few seconds, our eyelids automatically shutter and our eyeballs roll back in their sockets. So why doesn’t blinking plunge us into intermittent darkness and light? New research shows that the brain works extra hard to stabilize our vision despite our fluttering eyes. When our eyeballs roll back in their sockets during a blink, they don’t always return to the same spot when we reopen our eyes.

Scientists have presented a prototype for a 3D bioprinter that can create totally functional human skin. This skin is adequate for transplanting to patients or for use in research or the testing of cosmetic, chemical, and pharmaceutical products. This new human skin is one of the first living human organs created using bioprinting to be introduced to the marketplace. It replicates the natural structure of the skin, with a first external layer.

The researchers analyzed 304 recordings of stylistically diverse music from across the world to reveal the common features. Although they found no absolute universals, they found dozens of statistical universals (specifically, features that were consistently present in a majority of songs across different world regions). These included features related to pitch and rhythm as well as social context and interrelationships between musical features.

Babies born prematurely don’t use their expectations about the world to shape their brains as babies born at full term do; important evidence that this neural process is important to development. The findings offer clues to the mystery of why otherwise healthy babies born prematurely face higher risk of developmental delays as they grow. In 6-month-old babies born at-term, the portions of the brain responsible for visual processing respond not just to what the baby sees, but also to what the baby expects to see.

Can your smart watch detect when you are becoming sick? A new study indicates that this is possible. By following 60 people through their everyday lives, researchers found that smart watches and other personal biosensor devices can help flag when people have colds and even signal the onset of complex conditions like Lyme disease and diabetes.

A new study has found that the level of smile intensity in marketing photos influences how consumers perceive the marketer’s competence and warmth, which can lead to different results depending on the context. The researchers conducted experiments in which respondents viewed marketing images that included marketers with either broad or slight smiles. Also, they conducted a content analysis of postings on a website where people commonly seek donations for causes or business ventures.

The wetland impacts of the spill documented by the team included both the loss of wetlands due to shoreline erosion, and island fragmentation, where small islands are broken into even smaller islands, creating more shoreline. Land lost from fragmentation is unlikely to be reestablished, particularly in this part of the Mississippi River delta where levees prevent an influx of new sediments from the river. This will alter natural coastal defenses against flooding.

Over millions of years retroviruses have been incorporated into our human DNA, where they today make up almost 10 per cent of the total genome. A research group has now discovered a mechanism through which these retroviruses may have an impact on gene expression. This means that they may have played a significant role in the development of the human brain as well as in various neurological diseases.

The technology, known as a brain-computer interface, records and transmits signals through electrodes, which are tiny pieces of material that read signals from brain chemicals known as neurotransmitters. By recording brain signals at the moment a person intends to make some movement, the interface learns the relevant electrical signal pattern and can transmit that pattern to the limb’s nerves, or even to a prosthetic limb, restoring mobility and motor function.

Finally, the experimenters examined real insects. To see if leg adhesion might also play a role in the walking coordination of real flies, they put polymer drops on the flies’ legs to cover their claws and adhesive pads – – as if the flies were wearing boots — and watched what happened. The flies quickly began to use bipod-like leg coordination similar to the one discovered in the simulation.

NASA’s spacecraft recently detected organic-rich areas on Mars. Scientists evaluated the geology of the regions to conclude that the organics are most likely native to the dwarf planet. Data from the spacecraft suggest that the interior of Mars is the source of these organic materials, as opposed to arriving via impacting asteroids or comets.

A new innovation could make printing solar cells as easy and inexpensive as printing a newspaper. Researchers have cleared a critical manufacturing hurdle in the development of a relatively new class of solar devices called Bravo solar cells. This alternative solar technology could lead to low-cost, printable solar panels capable of turning nearly any surface into a power generator.

Today perhaps the best thing about open-source 3D printing is the open-source part. Makers, as 3D printer open source are called, not only use designs posted on the Internet. They also post their own and provide feedback. “It creates positive scientific karma,” researcher said. “You can share your ideas and get help from the community, and it speeds things up so much. It’s like having a global R&D team dedicated to your work.

The key to obtaining high levitation stability is the geometrical design of the two plates. A proper ratio of their sizes and vertical spacing allows the warm air to flow around and efficiently capture the levitated objects when they drift away from the center. Another sensitivity factor is that the thermal gradient needs to be pointing upward — even a misalignment of one degree will greatly reduce the levitation stability.

Scientists have witnessed a massive object with the makeup of a comet being ripped apart and scattered in the atmosphere of a white dwarf, the burned-out remains of a compact star. The object has a chemical composition similar to Halley’s Comet, but it is 100,000 times more massive and has a much higher amount of water. It is also rich in the elements essential for life, including nitrogen, carbon, oxygen, and sulfur.

Scientists monitored each item’s energy, print time and plastic use to determine its costs, then conducted a savings analysis on a per-item basis. For each item printed, from mounts for GoPro cameras to analyse tools, they ran high-cost and low-cost comparisons. For example, for a printed cell phone case, the total cost of printing was compared with the purchase cost of both a high-end phone case and the least expensive model available.

Today, the best-performing speech recognizers are, like many other state-of-the-art artificial-intelligence systems, based on neural networks, virtual networks of simple information processors roughly modeled on the human brain. Much of the new chip’s circuitry is concerned with implementing speech-recognition networks as efficiently as possible. But even the most power-efficient speech recognition system would quickly drain a device’s battery if it ran without interruption. So the chip also includes a simpler “voice activity detection” circuit that monitors ambient noise to determine whether it might be speech.

Field patterns are characteristic patterns of how disturbances react to changing conditions. Because field patterns exhibit characteristics of both propagating waves and localized particles, field pattern theory may answer some of the questions posed by quantum mechanics, in which objects can be treated as both particles and waves. First author Graeme Milton further posits that field patterns could describe the natures of the fundamental components of matter in the universe.

The applications of field pattern theory are still emerging, but one field they may apply to is quantum mechanics. In quantum mechanics, the probable locations of objects such as electrons are represented as clouds in which the object is likely to be found, and the shape of those clouds can be described using wave-like equations. But when an observer measures the position of an object, the wave-like behavior collapses into a single point of location, like a particle. Thus, objects behave as both particles and as waves.

Pattern formation in physical, biological, and sociological systems has been studied for many years. Despite the fact that these subject areas are completely diverse, the mathematics that describes underlying patterns in these systems can be surprisingly similar. Mathematical tools can be used to study such systems and predict their patterns.

Using two discrete models, one modeling the attractiveness of individual houses to burglars and the other modeling burglar movement, the authors of the UCAS study developed a continuum model based on a system of parabolic differential equations. Using this system as a starting point, the authors apply bifurcation theory, or the analysis of a system of ordinary deferential equations under varying conditions, such as social or economic conditions of a neighborhood, to extend the scope of analysis.