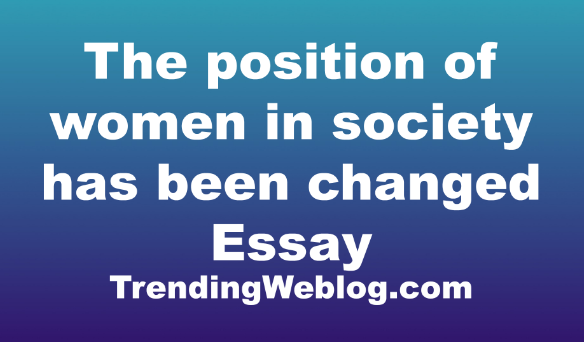 The position of women in society has been changed in the last years. To what extent do you agree or disagree with this opinion? Support your arguments with examples and with relevant evidence. Women in the past were considered helpless creatures and were dominated by males. As time progressed, women acquired a much better position than previously expected. Many people feel that this shift in the status of women has given rise to many problems like juvenile delinquency. In my opinion, the above statement is not justifiable.

These days, with the understanding of her needs, desires, rights and duties, woman has become more independent and works for the welfare of her family. In most of the modern families, males and females have an equal role to play. Both do jobs and add to the family income. The overall effect of all this is a more secure place for woman in the society. It is an accepted fact that a well-educated mother who holds a good career in the society can better raise her children. Studies reveal that children are healthier and are more likely to survive when mothers can read and write.

However, some people allege that problems like child delinquency are the result of this change in the position of women. According to them, when females stay away from children will not get adequate attention, and this isolation makes them delinquents. However, a thorough scrutiny will prove that this allegation is baseless.

In a family, children can be well looked after by other members like grandparents, or there trained babysitters who can look after children in a proper manner.

In the end, I would like to say that some social evils like dowry system and female foeticide still prevail in the society, and women are the ones who bear the brunt of such acts. A nation can progress only when females read, write, work and become independent.