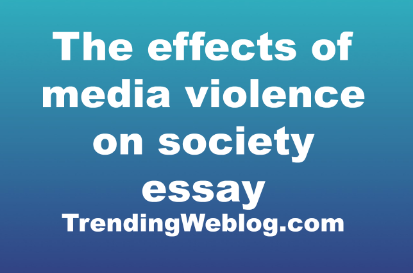 How does violence shown on television and in the movies affect the society. Write your own views. Violence in the media promote violence in society agree or disagree.

The violence portrayed on T.V and in the movies leads to an increase in crime in our society. People who watch violent movies are more likely to become criminals. Do you agree or disagree?

Violence in the media promote violence in society agree or disagree

Media has become equally important as air, water, and food. People watch movies, TV shows as their recreational activities. Nonetheless, some of us get so engrossed watching those shows that we think it’s real especially youngsters and teenagers. Because of which they cannot really distinguish between reality and fantasy. When it comes to watching violent movies, children get highly influenced and imitate same actions.

I feel that violence shown in the movies or TV impact children and unfortunately, they are more prone to becoming criminals. Not just the TV, social media is also full of these violent videos. Children are highly exposed to this virtual violence and there are more and more such videos flooded on the internet. There is a continuous trend that we see of explicit content on TV. Shows based on violence and brutality are trending.

Young people and children are more likely to engage in harmful activities and behave aggressively due to these shows. Definitely, every human behavior is different. Since children are gullible, they cannot really differentiate between right and wrong. As a parent or an individual, we see kids behaving aggressively, we need to stop them right away.

We don’t know if such kind of shows will ever stop airing on media. However, authorities should take some initiatives to curb this. These shows might lead to crime in our society and steps should be taken accordingly. However, as a human, we should take responsibility to stop this. Do not watch such shows. Indulge in outdoor activities, sports or more. Do not let kids exposed to these kinds of violence and explicit videos. This can be put a full stop right at home.