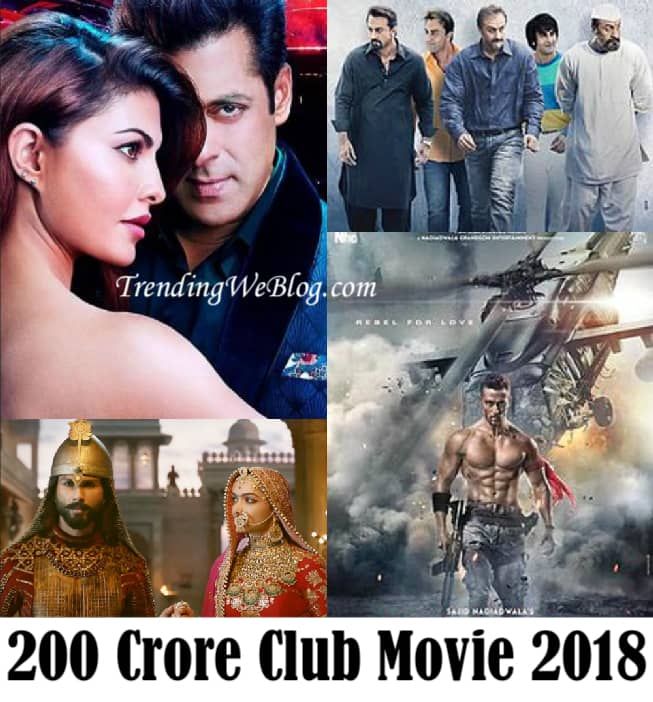 In the new ear movie like Ghajini and 3 Idiots unexpectedly collected a huge amount of box office collection. It was just a little time when 100 crores turned into 200 crores every fast. Now the 200 crore club is reached by many films.

Furthermore, films like Dangal collected over Rs 2000 crore. Now is the time when the audience wants to see good content on the big screen. Movies that have emotional connect with audience earn big number at the box office. Soon more movies will enter in 200 crore club.

After the release of Padmavat Tiger Shroff came with a remake. This remake was liked by the audience and it collected more than Rs 200 crore.

This is one movie which was not really expected to cross the box office collection of Rs 200 crores. Alia starrer movie Raazi was defiantly one of her best performance films.

Salman Khan played the lead in this film. Nothing more to say about this film; negative reviews but still Salman collected more than Rs 200 crore.

Movies based on Sanjay Dutt’s life Sanju made a huge impact on the audience. Ranbir Kapoor created history by collecting more than Rs 500 crore from box office India.

As we all know it was the most anticipated movie of the year and it collected Rs 500 net.

Again Salman Khan is lead in this movie. This movie made everyone clear that there is no limit when Salman is playing the lead role in any film.

Akshay Kumar starrer movie based on social awareness. Unexpectedly it made to Rs 200 crore which is one of the best things happen to Akshay Kumar.

Another movie which is based on social awareness Hindi Medium is one of the best movies ever made. It collected Rs 205 crores at the box office.

Tubelight which was not so good movie as per critics and audience but still manages to collect Rs 200 crores at the box office.

One actor who is gaining a lot of attention everywhere. Varun Dhawan is one young actor who made it to Rs 200 crore at the box office.

Varun Dhawan and Alia starrer movie Badrinath Ki Dulhania made it to Rs 200 crore club on 2017. In addition, Varun is getting popular with his every release.