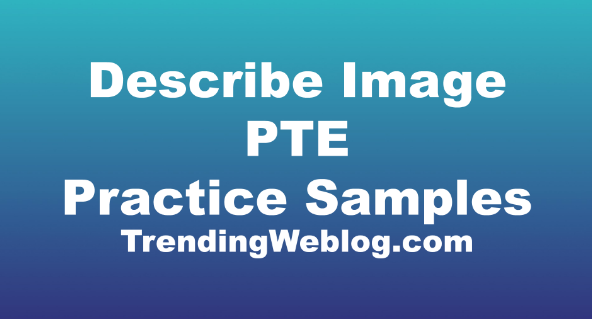 PTE Describe Image – Describe image is one of the challenging tasks in PTE speaking. You are required to describe image – the important information in a graph, a series of graphs, a table, a map, a process, an image or picture. Please look at the image for 25 seconds and describe it in 40 seconds. Write your own answers in the comment section. The sample answers will be provided after each question. The image represents the structure and function of various parts of a bike. It basically has two wheels made up of spokes to share riders weight evenly. The front wheel is attached to the handlebar, which makes the wheels easier to turn. The back wheel has gears linked by a chain that increases speed. The chain is connected to the pedal that cranks and increase pedaling force. There is a horizontal bar at the top of the frame that divides riders weight evenly between wheels. In conclusion, this structure looks simple but it’s a very efficient means of transport. The image represents how tropical storms are formed. The major contributing factors are high humidity and ocean temperatures of over 26 degrees. In the first stage, water evaporates from the ocean surface and clouds are formed when it comes into contact with cold air. Secondly, a column of low pressure develops and winds form around that column. And when the pressure in the central column weakens, the speed of the wind around it increases. In conclusion, it is clear that there are series of event involved for a tropical storm to develop.

The image represents the appropriate way to wash hands. To start with, wet the hands first and then take an adequate amount of liquid soap. The hands are rubbed against each other with the opposite palm and with fingers interlaced. Then, the thumb is clasped with the opposite palm and fingertips are also rubbed with opposite palm. Finally, the wrists are scrubbed and at the end, the hands are rinsed with running water to get rid of soap and the foam. In conclusion, to avoid the spread of diseases this procedure of washing hands should be followed every time. This flowchart represents the process of recycling glass. In the beginning, empty bottles are collected and they are purified on a conveyor belt by workers. Then, they are broken into fine pieces using metallic gears. An optoelectronic system is used to get rid of any impurities such as metals. After purifying, the fine particles are collected in a pot which melts the glass by the process of cullet melting. After that, they are put in the mould to give them a shape of a bottle again. In conclusion, this process stops unnecessary pollution of the environment. This image represents the structure of a human skeletal muscle. The muscle is attached to the bone by means of a white coloured tendon. The actual muscle is red in colour and made up of multiple muscle fibers. The outer layer of a muscle fiber is called epimysium and the layer between fibers is called endomysium. The perimysium wraps a bunch of fiber called fascicle. There are blood vessels between muscle fibers for a blood supply. In conclusion, the complex network of muscle fibers helps humans to carry out various tasks and daily activities. This flow chart represents the biodiesel cycle. In the beginning, the oil crops are harvested that use sunlight for photosynthesis to grow and produce seeds. The seeds are extracted and crude vegetable oil is produced from them. After refining the vegetable oil, alcohol is added to it and the process is called transesterification. The introduction of alcohol produces biodiesel and glycerol. The glycerol is used in the food and cosmetic industry, while biodiesel is used in vehicles. The CO2 released by vehicles is captured by oil crops. In conclusion, this looks very environment friendly process to produce renewable fuel. The image represents the process of harvesting rainwater for domestic and agricultural usage. In the beginning, the rainwater is collected on the roof of a house, which is transferred to the two feet deep, reused oil barrels situated in the underground. The rainwater is then allowed to enter the underground aquifers, which is then collected at groundwater reservoir. The water pump then transfers the shallow borewell water to the overhead tank. The pure water in the tank is used for domestic purposes and the raw water collected at underwater sump is used for plants and trees. In conclusion, this seems a very efficient process to recycle water. The two images represent the rainbow geometry, and the formation process of a rainbow. Basically, when the sun rays enter the rainwater droplets a rainbow is formed. After entering a water drop, they are refracted and the rays travel at different angles to produce various colours, which can be seen by a naked human eye. The rainbow is visible between 40 to 42-degree angles by an observer. In conclusion, the rainbow is made up of seven colours, and the presence of sun during raining is essential for this series of events to occur.