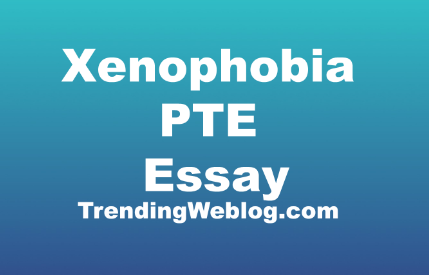 Essay – Xenophobia has accelerated rapidly in the Western countries. According to you what solutions can be proposed by the government and individuals? Complete the topic within 20 minutes. Write a 300-word essay.

Essay – Xenophobia Has Accelerated Rapidly In The Western Countries

Xenophobia is not a medical term; it is basically a political term. It is the fear that is developing in foreign countries due to foreigners being migrated to their countries. One can easily hear the news that one group of the native country attacked another foreigner. We never came to know about the exact reason of why it happened but we heard that particular group of the native country attacked foreigner group.

Today the process of migration is growing too rapidly. In order to survive in this cut-throat competition and in hope of getting better future people are easily migrating from their own countries. It is developing a fear in minds of native people that these migrated people are snatching their rights, their opportunities. I think due to this frustration, Xenophobia is rapidly increasing in western countries. We had seen few movies Like Crook, which also raised same issues where they showed increasing hatred between Indians and Australians

Both government and individual can play a vital role in reducing this xenophobia among people. Once should stay positive and wholeheartedly welcome people of different countries. As it is not only helping them in knowing different cultures but it is helping in boosting up the economy of their countries. They should understand that when a person of other country coming to their country then he is not only bringing his culture but he is bringing many things. The government should also act as a bridge between host and guest citizens. They should start campaigning love all over. They should make their people assured that it is not the murder of their rights but it is the beginning of a new friendship. Moreover, it will take the growth of both individuals and country hand in hand.