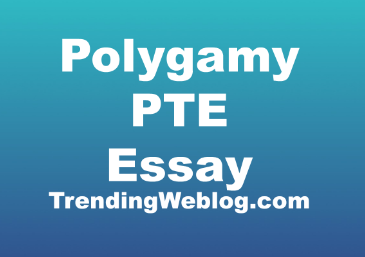 Polygamy PTE Essay – Polygamy has increased widely in this modern and brutal life. How far do you agree with this statement?

But we know change is the law of nature and when the time changes people change their movements. Today, the lives of people have become more brutal and more stressed. We can easily see differences in the opinion of couples so easily. We are very frequently hearing a thing call EXTRA MARITAL affair. This is nothing just an advanced or updated version of polygamy. It’s just that we are not officially married.

In today’s era when a man is not happy or satisfied with his wife, then he usually searches for some other shoulder or shoulders to cry upon but he can’t keep the other person officially with him as it is not permitted by our law now. So they get engaged in an extramarital affair where they are having a relationship which is not acceptable officially. So keeping all this in mind we can say that Polygamy has increased widely in this modern and brutal life.