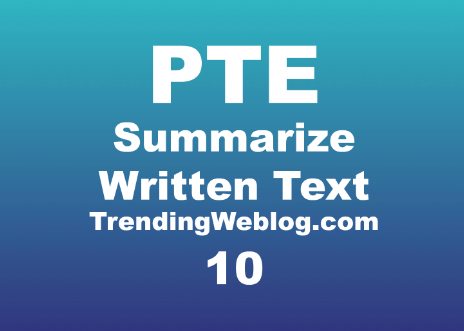 PTE Summarize Written Text – For this item type, you need to write a summary of the text in one sentence. You have 10 minutes to write your summary. Make sure to include the main points of the reading passage in a full, single sentence of no more than 75 words. The birth of the 20th century was like a flaming sunrise. More was expected of the century than any other. So much had been achieved in the previous one that it seemed sensible to expect that henceforth the world’s triumphs would far outweigh the disasters.

This infant century promised most to the European peoples, whether they lived at home or in the far-off lands they had colonized. Their children had higher hopes of an education than ever before, and the day-long labour of 10-year-olds in farms and workshops was no longer normal. The standard of living was improving, famines were becoming fewer and people were living longer. Warfare between the major European nations seemed to be on the wane, though very large armies and navies were paraded at the national celebration. Democracy was spreading, and liberty too. But most of these advantages belonged to only one-quarter of the world’s people and did not yet seem likely to spread to Africa, Asia, and the remote Pacific islands. There was peril as well as promise in the approaching century. The sunrise of 1901 was dazzling, but a bank of dark, slowly shifting clouds hovered above the light.

Europe rules much of the world. Most of the ocean liners and large warships flew British, German or French flags. Most of the big cities, and their famous palaces, museums, art galleries, and universities, were in Europe.  Almost all of the world’ railways and telegraph lines were built or financed by Europeans. Most of the major islands of the world were the provinces and colonies of Britain, Holland, France, Portugal, Spain or Germany. Nearly all of Africa and nearly all of the Pacific islands were ruled from Europe. In Asia, the only major countries that stood outside the European empires were China and Japan.

The early 20th century was a time that meant so much for all mankind, especially for the European people who witnessed the development of their own national power, technology and the standard of living as well as the expansion of their imperialism and colonies around the globe.

My warm greetings to all of you on the occasion of International Woman’s Day. It’s a proud privilege to be India do today. RCI is the institution which is the backbone of India’s strategic military research. An institution that allows us to both suffers place in select nations with ICBM capabilities. An institution that helps us to stay non-aligned in an extremely geopolitically sensitive world that we live in today and of course the institution that has always helped us to maintain operational dominance and battle worthiness every time this nation has gone to war.

I salute all of the other scientists, the technical advisors, the non-technical staff who make up this great organization. I should be wondering what I should talk to you about thought to myself. These are scientists highly qualifies people who have dedicated their lives to a very serious task “science and technology” and “R&D”. I am sure a task which means that every other priority in their life takes a backseat. Men and women irrespective of their caste, their religion, they are bringing their gender come together, work in tandem and achieve something which is bigger than their individual name and fame. They contribute to the nation-building calls to its security concerns and for this to my mind is what makes create organizations. As we move towards a more equal and humanist world, I repeat not a feminist one but an equal and humanist world. We must begin to realize and recognize that leadership and competence has no gender.