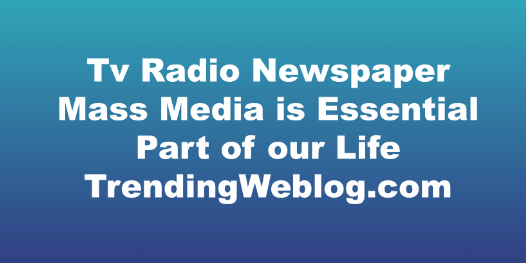 You should spend about 20 minutes on this task. Write about the following topic: Tv Radio Newspaper Mass media is Essential Part of our Life. What are the advantages and disadvantages?

“Nowadays, the mass media including TV, radio, and newspaper have become the essential part of our lives.” What is your opinion? We cannot do without electronic media. Mass media is as important as food, water, and air. Mass media keeps everybody updated about the world. We are aware of the local and international affairs. It enhances general knowledge. Also, it keeps us entertained.

Mass media has become part of a routine. It is not only restricted to newspapers, TV, and radio. I feel mass media or electronic media is beyond that. Emails, blogs, social networking, apps, newsletters everything has become part of our lives. Though definitely, we are updated about everything that is going on in the world. However, it has negative influence also on us. Since all these things are just a click away, youngsters get to read unwanted stuff which causes pressure on their minds.

Children are so much exposed to the internet these days that unknowingly they are becoming victims of cybercrime, bullying and child sex trafficking. Reports say that too much use of internet has caused many kids to a depression and are seeking counseling. Not just this, many have committed suicide due to cybercrime and bullying. Because everything is out there on the internet, kids are using dating apps as well without the knowledge of their parents.

Mass media has its own pros and cons. Since it keeps us updated, at times, it has a bad influence on people. There should be a way to keep a track on what should be circulated on the media and whatnot. Since it is an utmost part of our lives, there is no going away. But we need to make sure that we are protected from this especially the kids.