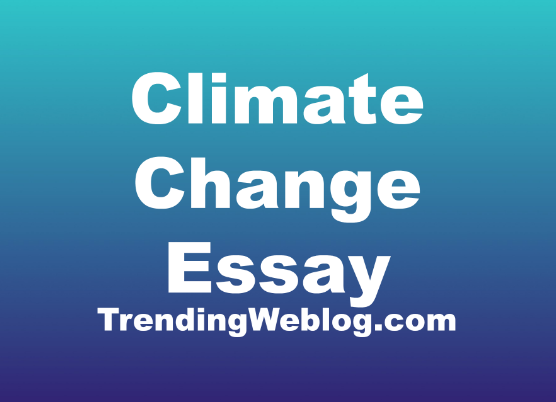 Climate Change Essay – Scientists and the news media are presenting evidence of climate change. Governments cannot be expected to solve this problem. It is the responsibility of individuals to change their lifestyle to prevent further damage. What are your views? There has been an average increase of 1.5 degrees Celsius in temperature, 8 inches rise in sea level, relentless income in carbon-dioxide levels compared to a century ago.

Most of the scientists believe that human activity is the main culprit for climate change. Indiscriminate use of fossil fuels, unsustainable methods of agriculture, population explosion, pollution due to industries, vehicles have been the major reason for climate change. It is observed that one-tenth of the Amazon forest are cleared to satisfy human needs.

This has brought havoc worldwide, erratic rains, floods, fatal diseases, droughts, submergence of low lying lands, have been common. It is to be noted that ‘Climate refugees’ are increasing which has to be a wake-up call for all of us.

Though there have been measures such as UNFCC, Kyoto Protocol, Montreal Protocol, UN sustainable development goals which work towards controlling climate change, more has to be done. All countries should work together, as UN Secretary-General said: “If we do not swim together, we sink”. This reiterates that it is high time people join hands across borders, politically, socially, economically to save the Earth.

Climate as Field of Study

Nowadays, the issue of climate change is getting huge importance all over the world. So we also study the climate field, I would like to study the underlying causes of climate along with the solutions to tackle them.

To begin with, many reasons can be offered to explain why I am choosing this particular topic. We have been experiencing the hottest 15 years on record in the last two decades. Because of this, millions of living persons are at the risk of drought, chronic water shortages, bushfire, coastal flooding, and hazardous air pollution. On the urgent note, steps should be taken as early as possible regarding these issues of climate change.

What is the role of individuals, institutions, societies, and government in addressing the climate change? Everyone must do their part. As the saying goes, the drops fill the pot with the droplets, the same way, by contributing small efforts of individual will surely help in tackling big problems. As an individual, we can help by taking action to reduce our personal carbon emissions. The strict set of actions should be taken by government such as transforming our energy system to a cleaner one, placing limits on the amount of carbon that polluters are allowed to emit, reducing tropical deforestation and its associated global warming emissions.

In conclusion, both individual and government must play their part in looking after the environment. Therefore, I would like to play my part to contribute to the solution of climate change. If we are to save our planet, it is important that this is treated as a priority for all concerned.

These days, governments around the world seem busy discussing environmental issues and devising ways to solve them. However, the question still remains whether it is the responsibility of governments to address them or should individuals bear the responsibility to change their lifestyle to solve the problem. In my opinion, the active participation of both is essential for the success of any initiative aimed at curbing this problem.

Firstly, industry accounts for a large proportion of greenhouse gas emissions, and this can only be controlled by government action. Measures can be taken to discourage pollution, such as limiting or taxing the use of fossil fuels. Alternatively, subsidies can be offered to industries to clean up their production processes. If these ideas are adopted, I believe that businesses will link pollution to profitability.

However, national and international policies will only succeed if individuals also change their lifestyle. For example, people could reduce electricity use by installing energy-efficient light bulbs and electrical appliances, or installing solar panels. In addition, attitudes to transport need to change. Instead of covering short distance by motor vehicles, people could choose to walk or cycle.

To sum up, my opinion is that a combination of international cooperation, governmental initiatives, and individual participation, further damage to the environment to could be reduced, if not stopped.

“Climate change is a terrible problem, and it absolutely needs to be solved. It deserves to be a huge priority.”- Bill Gates
The brunt of the climate change is facing by the whole world. Recently, many reports reveal that the problem of climate change is due to 2 degree Celsius rise in temperature.

As a name suggest, climate change is a change in the climatic conditions on the earth. Several factors contribute towards this change since centuries. However, the more recent ones that are mainly a result of human activities are having a negative repercussion on the atmosphere. The major factors that contribute to climate change are solar radiation and human activities.

Climate change has drastically affected the agriculture pattern, wildlife, nature, forest, raining pattern etc However the global community became aware of the consequences of climate change. There are many initiatives taken by the global community like Kyoto Protocol and recently Paris Climate Summit in which all countries agreed to reduce dependence on fossil fuel which helps to control global warming.

The Indian government is very serious about climate change. The government has taken many steps like started investing in green technologies, creating awareness among people etc. and taken many initiatives like FAME India scheme, International Solar Alliance with France. All these initiatives help India to reduce dependence on fossil fuel.

Climate change is a global problem. Besides the natural forces, human activities have also contributed majorly to this change. While the natural forces cannot be controlled, human beings must ensure they control the activities that lead to a negative impact on the weather in order to maintain harmony on the Earth.

Climate change is not a recent phenomenon. It has been going on since antiquity and will go on continuously. In today’s world what we mean by climate change are the undesirable changes in current climatic situations due to several natural and anthropogenic activities.
Of late, people have become more concerned and we have been witnessing national and international efforts in this direction like UNFCCC, IPCC Reports, Kyoto Protocol, Paris Deal, Kigali Agreement to name a few.

Humans in their relentless pursuit of progress, comfort and security have put enormous pressure on nature, particularly since the industrial revolution. Consequently, the life-sustaining environment has been forced to transform more rapidly than ever before. There are several negative impacts of this change. The most talked about one is the Rising Sea Level because of polar ice melt due to global warming.

There can be various ways of combating or stopping the undesirable changes in the climate like minimizing the burning of fossil fuels, sustainable consumption, more and more afforestation, appropriate land use pattern, water harvesting and reducing the loss of water, more emphasis on renewable sources of energy etc. Intergovernmental Panel on Climate Change (IPCC) in its assessment report mentioned that the global temperature should not exceed 2 degrees above the pre-industrial level (1850). This was confirmed and taken as a target in the Paris Agreement on Climate Change in 2015 by the world leaders.

As the name suggests, climate change is a change in the climate conditions on the Earth. Several factors contribute towards this change since centuries. However, the more recent ones that are mainly a result of human activities are having a negative repercussion on the atmosphere.

Researchers continually observed the pattern to understand and past, present, as well as the future climate conditions. A record of the climate has been accumulated and is updated regularly based on the geological evidence to study the changes occurred. Their evidence includes the records of flora and fauna, glacial and periglacial processes, records of sea levels, borehole temperature profiles and sediment layers among other things.

Solar radiation is energy emitted by the Sun that reaches the Earth and is carried further to different parts of the planet by winds and ocean currents are one of the main reasons for the climatic change. The new age technology is adding to the emission of carbon on the planet which in turn is having a negative impact on the climate.

A number of species of plants and animals have gone extinct due to the change in the climate conditions and many others are on the verge of going extinct. With the mass extinction of trees in certain regions, many forests are also diminishing. Change in the climate condition is also having a negative impact on the natural water system. It has resulted in the melting of glaciers and erratic rainfall that in turn are leading to environmental imbalance.

In conclusion, climate change is a global problem. Besides the natural forces, human activities have also contributed majorly to this change. While the natural forces cannot be controlled, hum beings must ensure they control the activities that lead to a negative impact on the water in order to maintain harmony on the Earth.