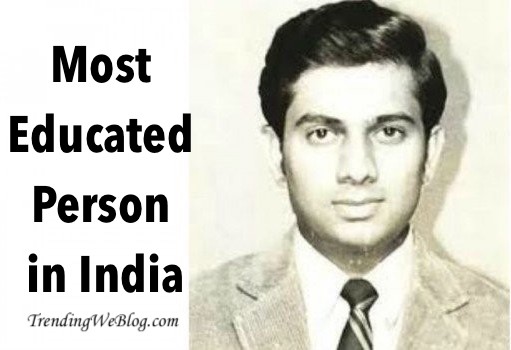 Probably most people don’t know he had one of the biggest personal libraries in India with more than 52,000 books. Dr Shrikant Jickhar interacted with students who want to study and achieve the benchmark in their life. When I was going through his achievements I was amazed to know what actually he has achieved in such a short span of time. Therefore at a certain point, I thought is it really possible for a human to achieve such vast educational portfolio. It seems that Oxford Dictionary Authorities need to add a new word as an adjective for such a superhuman.

Degrees of Most Educated Person in India Likewise, me all of you reading this article will be amazed after reading the following achievements of Dr Jichkar.

These were the TWENTY degrees that Dr Jichkar achieved. Apart of all these degrees, he wrote 42 examinations in winters and summers.

Another big achievement that people have not ever thought about. When he was just 25, in the year 1978, He cleared IPS (Indian Police Service) examination. But he resigned from his job and start preparing for IAS (Indian Administrative Services) examination which he nailed it. He was an active person in his entire life. He travelled the world speaking about health, economics, fitness and religion.

Carrier of Most Educated Person in India

Dr Jichkar had a sensational political career. Political career began when he was a youth leader during college days. As per news, he was one of the most active people who work for the goodwill of students. In 1980, he was elected to Maharashtra Legislative Assembly. Another record in his career when he became the youngest MLA in the country at 25. Surprisingly he was a powerful government minister who was holding 14 portfolios at a time.

He also becomes a member of Maharashtra Legislative Assembly in 1982 till 1992 and served as Minister of State, Government of Maharashtra. After 1992 he becomes the member of Rajya Sabha till 1998.

Family Background of Most Educated Person in India

Shrikant Jichkar was born to a wealthy farmer in Nagpur district, Maharashtra. India’s most educated person or we can call him a genius, lost his life due to a road accident on 2 June 2004. On National Highway 6 just 40 Kms away from his Nagpur his hometown a truck coming from opposite direction smashed his car.

Hence, I request every one of you to share this article so that our youth can get inspiration from people like Dr Shrikant Jichkar.