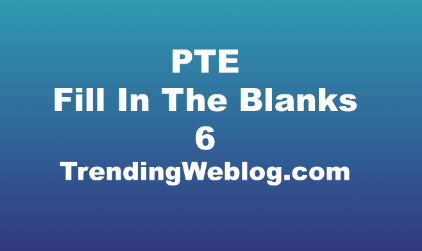 PTE Fill in the Blanks – Read the passages aloud to properly practice for the real exam. After you have read the passage with the gaps, attempt to place the words into the passage.

PTE Fill in the Blanks Practice

For intubation, we have a tube that has pre-selected for the dog named Richie. There are [1.] __________ of ways of determining the size of the Mattoon for a dog. You can estimate just if you are able to [2.] __________ the trick here that the air pipe and work out roughly what size is it. Sometimes in some dogs, if you hold their head up and have a look at their nose, there’s a fleshy area that sits just down underneath the nostrils and that’s sort of area they can [3.] __________ you a rough idea of the diameter needed for the tube. The more Mathematical way of doing it is getting their weight and dividing their weight by four and then adding four. For example, if a dog is of 30 kilo’s that’s roughly divided by four which results to seven and a half. If we add four that’s [4.] __________ between eleven and twelve.