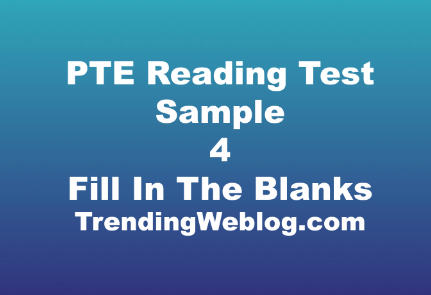 Fill In The Blanks PTE Reading Test Sample 4 – There is a passage with some missing text. Choose the appropriate word from the list of given words. PTE Reading Fill in the Blanks assesses reading skills and requires test takers to use contextual and grammatical cues to complete a reading text by identifying the single correct answer for each blank.

Reasons why hunter gathers moved from place to place? They would have eaten up all the available plant and animal resources, by [1.] __________ at one place for a long time. So they would have to go elsewhere in search of food. Hunters have to follow the [2.] __________ of animals. Because animals move from place to place either in search of food. In case of deer and cattle, they search for grass and leaves. Plants and trees bear fruits in different seasons. So people may have moved from season to season in [3.] __________ of plants. People living on the banks of rivers and lakes would have to go in search of water during the dry season. People may have also traveled to [4.] __________ their friends and relatives.

after, really, means, known, was, until, for, with

The very first British railways built locomotives were extensions of the design practices [1.] __________ four constituent parts. That constituent parts are the Great Western Southern London Midland, Scottish, London and North Eastern where we are not [2.] __________ 1951. Three years after nationalization [3.] __________ it possible to produce a new British Railways design locomotive? In that year, the first specifics of the British Railways standard class seven were built, rather less prosaically [4.] __________ as for ten years after the pioneer locomotive which remains today as we will see later.

This year just like every year, we [1.] __________ apple’s WWDC. Now being a worldwide developer conference, this is not like a hard word product launch or anything like that. This is mainly just Apple talking to developers [2.] __________ software. So watch OS, Mac OS, IOS – all that good stuff. We hope for like some nuggets just a little bit of hardware to be thrown in there. Like I think last year at this, we got the sneak peek of the iMac Pro and we got home pot [3.] __________ we are out here for 2018 and the main keynote has come and gone. There is zero new hardware for this event. I already kind of gave my sort of first impressions and raked it live on Twitter but for the sake of putting everything in one place. Or if in case you missed it and don’t [4.] __________ to watch the three-hour keynote. These are the top five announcements of WWDC 2018.