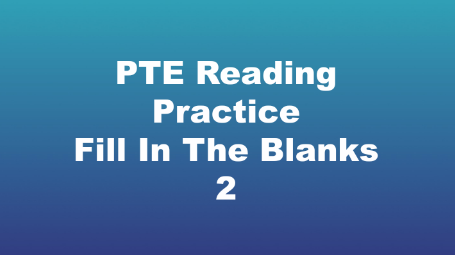 Fill In The Blanks PTE Reading Practice – There is a passage with some missing text. Choose the appropriate word from the list of given words. PTE Reading Fill in the Blanks assesses reading skills and requires test takers to use contextual and grammatical cues to complete a reading text by identifying the single correct answer for each blank.

Gold is the softest and most malleable metal. It can be presses extremely thin [1.] __________ into various shapes even drawn out to form a fine wire. And all without breaking gold isn’t affected by water or oxygen as many metals are so it doesn’t rust or tarnish [2.] __________ . Most gold comes from lode deposits also called vein deposits concentrations of gold and other metals in the cracks of rocks. Load deposits require hard rock mining. The process of [3.] __________ gold-bearing rock is done by drilling and blasting. Miners descend more than half a kilometer underground. There they drill holes for explosives [4.] __________ what’s called a long hole air drill.

oppose, depending, established, of, based, represent, or, and

Heat zones of the Earth are [1.] __________ on the vertical and slanted rays of the sun. Because all parts of the Earth do not receive an equal amount of heat from the Sun. So the heat zones are divided into three heat zones [2.] __________ upon the amount of heat they receive. The vertical rays of the Sun do not go beyond the tropics. The Sunrays limits are from the tropic of cancer to tropic of Capricorn. The two tropics [3.] __________ the farthest limit of the Sun’s vertical rays. So the three zones of heat are Tropical zone [4.] __________ Torrid zone, Temperate zone and Frigid zone.

The Byzantine empire underwent [1.] __________ changes in the eighth and ninth centuries. The rapid advance of the Arabs after the mid 7th century deprived the empire of its vital eastern provinces. The [2.] __________ of territory and resulting economic and social changes coincided with the iconoclastic controversy which [3.] __________ Byzantium until the midnight sun tree. The theological dispute over whether it was acceptable to portray holy Sigler and to venerate icons had its roots in older writings going back to as early as the fourth century. However, it [4.] __________ into an open conflict. One in 726 and for over a century thereafter Byzantine emperors embraced and sought to impose iconoclasm.