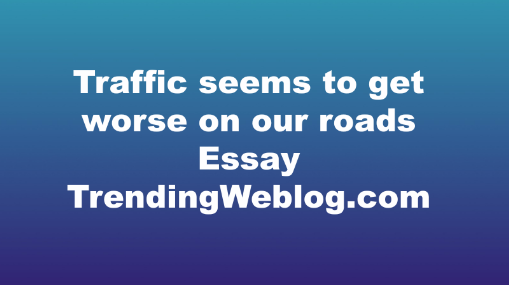 Traffic seems to get worse on our roads. How can we reduce the number of cars on our roads today? What alternatives can we offer to car drivers?

Traffic seems to get worse on our roads Essay on Traffic seems to get worse on our roads

The more the people are in the world, the more the cars will be on the road. In fact, increasing affluence made it possible for ever-larger number of people to have cars. Though it has improved travel comfort considerably, it also leads to problems like road accidents, pollution and traffic jams.

It is an accepted fact that people like their cars because of the freedom and independence the cars give them. One possibility would be to raise car taxes and fuel taxes, which may scare people away from using cars. Taxes on new car sales could be increased in order to discourage people from buying. However, the government that introduces such ideas will not be popular and would probably lose power. Governments, therefore, dislike taking such radical steps.

In my opinion, it is highly necessary to change people’s attitude first. They should be made aware of the environmental issues associated with the higher use of cars Also, people can be introduced to innovative ideas like carpooling. In addition, cities should be made bicycle friendly with separate track for cyclists, which may enable people to use bicycle for short distances.

In total, reducing traffic is a difficult task. I think it is almost an impossible task to reduce the number of cars but we can control its growth by changing people’s attitudes and by getting them to use other ways of traveling.