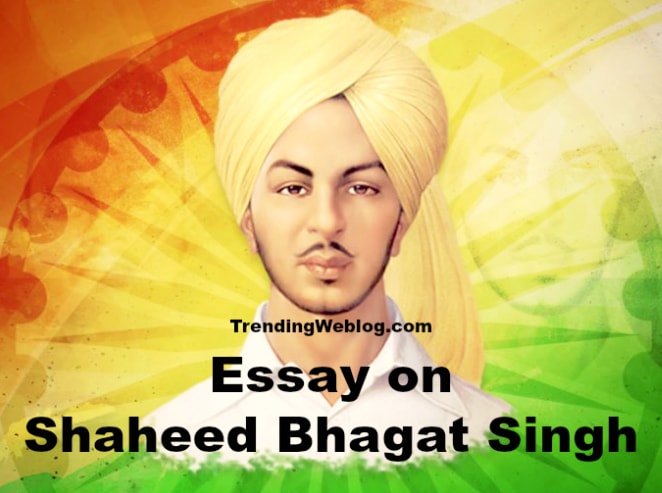 Bhagat Singh was a young Indian revolutionary who is known as “Shaheed Bhagat Singh”. He is considered to be one of the most influential revolutionaries of the Indian Independence Movement. Sardar Bhagat Singh is the most prominent name in the Amar Shahidas. His slogan of ‘Inquilab Zindabad’ made a great impact on the youth during the freedom movement.

Bhagat Singh was born on September 28, 1907, in a linguist Sikh family of Banga village (now in Pakistan) in District of Leelpur, Punjab. His father’s name was Sardar Kishan Singh and mother’s name was Vidyavati Kaur. His grandfather Arjan Singh, father and uncle Ajit Singh, were all active in the freedom struggle.

While studying at the local D.A.V School in Lahore, in 1916, young Bhagat Singh came into contact with some well known political leaders like Lala Lajpat Rai and Ras Bihari Bose.

The Jallianwala Bagh massacre in Amritsar on April 13, 1919, has a profound effect on Bhagat Singh’s thinking’s that after leaving the studies of the National College of Lahore, Bhagat Singh established the Naujawan Bharat Sabha for India’s independence.

Bhagat Singh exploded bombs in the Central Legislative Assembly, Delhi in 1929. He was hanged with two comrades on 23rd March 1931. He was just 23 years old when he was hanged to death. He was rightfully been given the title of Shaheed-e-Azam (King of Martyrs).

Bhagat Singh was born on September 27, 1907, in a Sikh family in Banga Village (now in Pakistan), Punjab, in British India. His grandfather Arjun Singh, father Kishan Singh and uncle Ajit Singh were all active in the freedom struggle. The family atmosphere had a mind of young Bhagat Singh and patriotism flowed in his veins from childhood.

While studying at the local D.A.V School in Lahore, in 1916, young Bhagat Singh came into contact with some well known political leaders like Lala Lajpat Rai and Ras Bihari Bose. In 1919, when the Jalianwala Bagh massacre took place, Bhagat Singh was only 12 years old. The massacre deeply disturbed him. On the next day of massacre, Bhagat Singh went to Jalianwala Bagh and collected soil from the spot and kept it as a memento for the rest of his life. The massacre strengthened his resolve to drive British out from India.

In 1925, he initiated the militant youth organisation called the Naujawan Bharat Sabha. Bhagat Singh was an active member of the Hindustan Socialist Republican Army. To avenge the death of Lala Lajpat Rai, he killed Saunders on 17th December 1928. The police tried to capture him. However, Bhagat Singh was successful in avoiding arrest.

On 8 April 1929 Bhagat Singh, with Batukeshwar Dutt, threw two bombs into the Assembly chamber while it was in session. The bombs were not designed to kill. The intention of the explosion was to make the British government alert that the people of India will not tolerate them anymore. Instead of running away, both allowed the police to arrest them while they threw pamphlets on their agenda and shouting the slogan (“Inquilab Zindabad!” “Long Live the Revolution”). After the bombarding, they surrendered.

He was helped on this charge in prison. He underwent a 116 day fast in jail and so he did not have food for that long. He did this to demand equal political rights for both British and Indian political prisoners. In response to this determined protest, he gained nationwide support.

On 23 March 1931 Bhagat Singh, Rajguru and Sukhdev were executed after being convicted on the charges of murder of Saunders, conspiracy to kill Scott, and the bomb explosion in assembly. At the age of 23, Bhagat Singh sacrificed his life for the independence of his homeland, India.