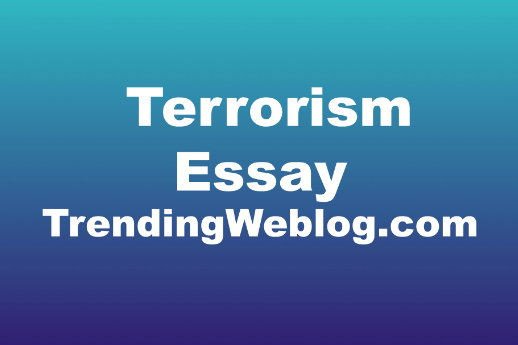 Terrorism Essay – One of the greatest threats faced by the present-day world is terrorism. Discuss the reasons and solution of terrorism. Write a Terrorism essay from about 200 – 300 words. Terrorism is the systematic use of terror. At present, there is no internationally agreed definition of terrorism. Generally, terrorism refers to those act which is intended to create fear to achieve an ideological goal. Terrorists deliberately target or disregard the safety of common citizens.

The first and foremost reason for terrorism is frustration. When some individuals or a section of a society face discrimination of any kind; religious, social or political, they may resort to vandalism. Suppressing the right to expression is hazardous as the suppressed may find out more violent ways to express their feelings. For example, many religious and social minorities in India are in the habit of talking on armed agitation because they think they cannot expect justice from the government.

Yet, one cannot ignore the fact that terrorists are not born but are made by society. Hence, it is possible to control this menace effectively with the combined efforts of the government and the public. Firstly, minorities should be given adequate representation so that they do not feel excluded from mainstream society. Also, there is a need for stringent laws to ensure that the civilians are not using arms and ammunition to achieve their goals. Otherwise, the security and sovereignty of the nation will be at stake.

In total, it can be said that those who exhibit aggressive ways to gain their goals should be stifled at any cost so that the common citizens of the country can function independently and fearlessly.