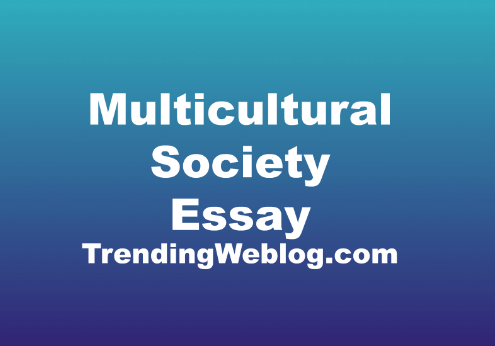 A multicultural society is a society where people live with unity in diversity. Even in ancient times, people who immigrated to other countries encouraged and accepted diversity. We can see amazingly diverse people in a multi-cultural society.

A multicultural society is a mixture of different ethnic groups, cultures, dressing styles religions, languages and size of the population. India is a nice example for multicultural society. It provides so many opportunities and enjoyments to the people. Living in such a land is really wonderful. We can share and acquaint with different customs, traditions, and festivals. But the people should be able to understand the feelings of others and so not hurt others’ emotions. Generally, people in a multicultural society are more tolerant, patient and more cooperative.

Opponents of this theory say that multiculturalism is out of date and no longer useful because it encourages separateness between communities. The disturbances which happen in a multicultural society are due to discriminations and lack of tolerance. A spark in such a society can create so many troubles. The real problem lies in the differences between the people which always confine them in small walls, even if they are neighbors.

However, the people can make a wonderful world if they have a sharing mentality and national spirit. They may all feel that our region is the best, our people the most superior, but no one feels of the other as not belonging. As far as they have this spirit nobody can create any problem among them.