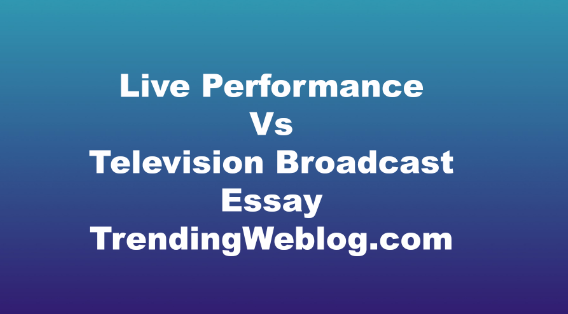 Attending a live performance is more enjoyable than watching television

The issue of whether to attend a live performance or enjoy watching the same event on television is a controversial one. In my opinion, both have their own advantages.

First of all, watching an event on television can bring many advantages. One can settle in his favourite chair and relax, eat a cake or have a drink. One does not have to spend time driving to the place where an event takes place. People shoud pay massive expenses because most of the time, a ticket is very expensive. So watching TV saves money which one can spend on another important necessity. Moreover, sitting in front of a television set, one is likely to see the interesting parts of a show more clearly with the help of an operator. Moreover, people have to continue seeing when they want to pose. For example, when people want to go to a toilet, they should wait for a respite. Finally, the weather is no longer a hindrance as the person can remain indoors. It does not matter if it is rainy or chilly outside.

From the other side, attending a live performance has many advantages too. Firstly, people can enjoy the songs as they are in real-time because of the charged audience. Also, a live music performance gives much more positive energy and many beautiful moments than one watched on television. Audience clap, dance, shouts and narrates the slogan to warm the pleasant environment. Frankly, watching a show at home does not give that. One can enjoy loud music, the closeness of his favourite stars and shout the songs he likes.

In summary, it is better to attend live performances in the case of a concert. However, it is always better to watch sports events on television at home.