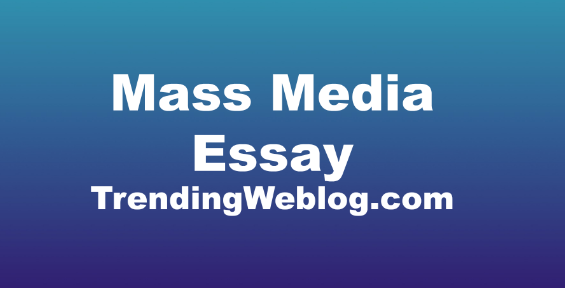 Mass Media Essay – TV, internet and radio are very popular nowadays. Some people say that they will replace books and written words as the main source of information. To what degree do you agree or disagree with this position? Internet and television, as the mainstream of media, play a very import role in information transfer. They present a colourful and vivid world in front of us. Some people assert that the internet and television would take the place of books in a few years. However, facts tell us that each medium has its own advantages and disadvantages and books will not retreat from our life.

However, we should not neglect the importance of books which are very convenient to carry and easy to get. Books are available everywhere, such as in libraries, in the bookstores, in your pocket or beside your pillow. After a day’s work, we can lie on bed relaxing by reading some novels or newspaper. You can read a very interesting story on a train or on the plane. TV and Internet would not be that convenient and further, they could cause tiredness if you sit in front of them for a very long time.

In conclusion, books are one of the main sources of information and they are very convenient for people to read. Books will not disappear from our life in the future, through television and the Internet will have a profound influence in our life.