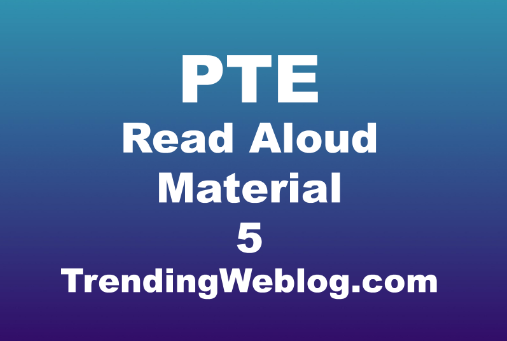 PTE Read Aloud Material – Read Aloud each question in 40 seconds. A sample answer will follow after each question. In this post, we share the questions for your practice. So I think that we may be unique among the apes in that we can detect when a food has been cooked or fermented. And that this allows us to identify the benefits of those, which is that they’re detoxified, they have greater available nutrients, that they are, in the case of fermented foods, going to have probiotics – or good microbes that we want and need in our intestines in order to survive in the world.

Scientists investigated those pathways in humans and mice. They found that exposure to low oxygen depletes stores of a red-blood-cell protein called eENT1. That’s a good thing. Because now other substances that protect your body against low oxygen are free to rapidly accumulate and help the body adapt. But here’s the kicker – once the eENT1 protein goes away, it doesn’t come back. Meaning red blood cells kind of ‘remember’ their altitude exposure.

And so a cohort study where some school-age children were given 40 minutes or more time outside, those children had a 23 to 50 percent less likely chance off developing myopia than students at schools who were not given that same amount of outdoor exposure. And it looks to be dosage dependent, so the longer time you spend outside the less chance you have of developing myopia. So the exact mechanisms are not really known, so we really need a lot more research into this. But another major factor that’s being implicated is near-work activities.

The invaders she’s talking about are central casting for an underwater horror movie. Take the nomadic jellyfish, in huge swarms 60 miles long, which sent hundreds of people to Turkish hospitals a few summers back. Or a type of pufferfish, extremely poisonous, that occasionally gets fished out, and lands at fish markets by mistake. Galil says these bad guys, and many others, have invaded the Mediterranean through the ever-widening Suez Canal.

Last Christmas, Santa Claus must have been loading his sleigh in a t-shirt and shorts. Temperatures at the North Pole crept up toward the freezing point when they should have been minus twenty Fahrenheit. The heat wave was the latest in a series that have swept over the Arctic in recent winters. Climate change has caused steady warming in the region. But it has also helped supercharge these extreme events, which scientists say are tied to storms that spiral north out of the Atlantic.