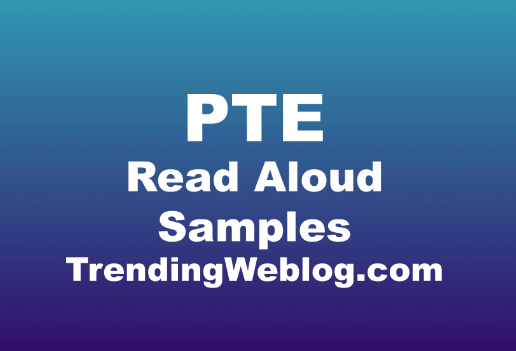 PTE Read Aloud Samples – Read Aloud each question in 40 seconds. A sample answer will follow after each question. In this post, we share the questions for your practice. One common idea is that such animals form social groups to reduce the risk of being gobbled up. But Heathcote wanted to see whether the benefits of social living might come from the strength of individual social relationships rather than simple safety in numbers. The researchers caught 240 female Trinidadian guppies and divided them into groups of fifteen, each group in its own small pool.

You can either hang out with a load of guppies, and every time these predators attack, you’re unlikely to be the one that gets eaten. But obviously the first thing that happens when you form a big shoal is that this attracts every single predator in the vicinity. The alternative is you can be inconspicuous in small social groups of three-four individuals. Everyone’s kind of looking out for each other, they’ve got each other’s back.

The deep sea-once are incredible scavengers. This is why they thrive in the deep sea, because it’s a low-food environment where most of their food comes from dead carcasses raining from the surface or particulates coming down. So, everything from an organic particle to a dead whale is fair game to an amphipod.

The food that floats down to the ocean bottom carries man-made contaminants, including PCBs, which entered the surface ocean from rivers and coastlines. Companies stopped manufacturing these chemicals in the 1970s, after they were found to be dangerous. But they don’t break down easily, so they’re still swirling around in the oceans and working their way down to the seafloor, where amphipods gobble them up.

In many surface-dwelling species, PCBs have been shown to interfere with animals’ abilities to reproduce. Jamieson says they don’t have enough data yet to know how deep-sea amphipods are farming, because they’re much harder to study. But he says that wasn’t his motivation for studying pollutants in the deep ocean.