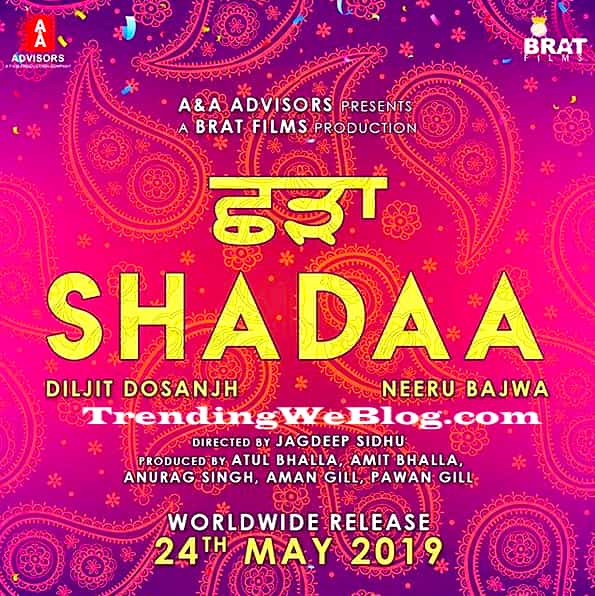 Shadaa Punjabi Movie – If you are waiting for Diljit Dosanjh’s next Punjabi film then your wait is over. Diljit finally announces his upcoming Punjabi film to hit cinemas in 2019. As we all know Diljit is busy in Bollywood projects till the end of this year. Diljit took his Instagram account to announce the film. He uploaded a first look poster of the movie. Along with Diljit Dosanjh, you will see Neeru Bajwa in the lead role. Earlier both these actors were seen in Sardaarji which was released in 2015.

After Diljit entered in Bollywood he worked in only one Punjabi movie i.e Sajjan Singh Rangroot. Basically, he is doing more Bollywood movies. Now he will we seen in Arjun Patiala Bollywood movie which will release in 2019. Know more about Diljit Upcoming Movies. The shoot of the movie will start at the end of this year. Still, both the actors are busy working on different projects. The basic theme of the movie will be a comedy. Jagdeep Sidhu is a screenwriter who has written superhit scenes of films like Nikka Zaildar, Nikka Zaildar 2 and Harjeeta. He is going to start he career as a debut director.

The tailor of the movie will release in May 2019. Soon we will updated on our blog. After the trailer release, we will update you on review and breakdowns.

This is going to be Diljit’s first Punjabi movie in 2019. Neeru Bajwa is still working on other Punjabi films like Uda Eda and Aate Di Chiri which will release in 2019. Get a list of Neeru Bajwa upcoming movies.

Get more updated on upcoming Punjabi movie 2019 stay tuned to our website.