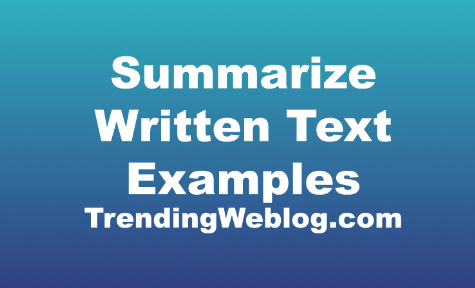 In this article, we provide quality PTE Summarize Written Text Examples with Answers. In this question type, you are given a passage to read. Then you have to summarize the passage in one sentence comprising 30-40 (not more than 75) words in 10 minutes.  Now solve these given below summarize written text examples and type your response in the comment section. Public figures include politicians and other public officials such as judges and civil servants as well as celebrities such as film stars, musicians, and sports stars. The very nature of these roles opens these people to scrutiny by the press. The extent to which the media are legally free to investigate and publish details of public figures’ private lives varies from country to country. Countries like France are much stricter on protecting personal privacy than, for example, Britain.

People have a right to know about those in power. Whether through taxes, in the case of politicians and civil servants, or by revenue generated by films, music, TV, sporting appearances or concerts in the case of celebrities—these people’s income is dependant on the general public.

People have the right to make informed judgements about the kind of leaders they have. Attempts to restrict what may be reported about public figures in the press could easily become a conspiracy to keep voters in the dark and to manipulate them. All elections are to a greater or lesser extent about the character of the leading politicians involved. Unless the voters are allowed insights into their private lives they will lack the information needed to make a fair decision at the polling booth. For example, some people believe that a politician who betrayed his wife in an affair was equally capable of breaking his promises and lying to his country.

Exposing corruption and dishonesty on the part of public officials and businesses is a critical part of the function of a free press, and it is essential to the functioning of a free-market economy. If investigative journalists are prevented from scrutinizing the private lives of public figures, then corruption and crime will be much easier to hide.

Public figures know that with fame comes a price and that price is constant scrutiny. In fact, many celebrities actively seek media exposure in order to advance their careers, revealing to the media many aspects of their personal lives. Once success has been brought in such a fashion it is then somewhat hypocritical to complain of “press intrusion” into those few aspects the star would prefer to remain hidden.

Although the extent to public fighter private lives’ exposure varies from country to country, citizen deserves the right to know the private lives of celebrities as people decide celebrities’ income and power while some public figures did use public exposure to gain benefits.

Lewis has 30 years of experience in various aspects of marketing and this time we are going to talk about top three things you can do to attract tourists to your destination. Last year Google reports show that around 68% of tourists are doing research online before they even decide what destination they wanna go to. What others are going that they are looking comparison shopping at various destinations. One other most important type of thing which he thinks you should be doing is having specials on your website on your all online properties to impress tourists. Tourists among all segments are doing comparisons shopping before they look at the review sites.

Past experience is the second item in the list. 64% of tourists are using their past experience to inform where they want to go on next coming vacations. You really must have an e-mail list, so stay touch with these tourists so that when they want to go anywhere, they contact you first. E-mail helps us to bring the old customer back again. So this is also an effective tourism marketing idea.

Search remains the number one choice for travelers to research on where to go on vacations. 51% of normal travelers and 69% of business travelers watch video online before going on vacations. This “Search” is the number one in the list of tourism marketing ideas. If you own Youtube channel, then upload your stories and give the latest news regarding the particular destination.