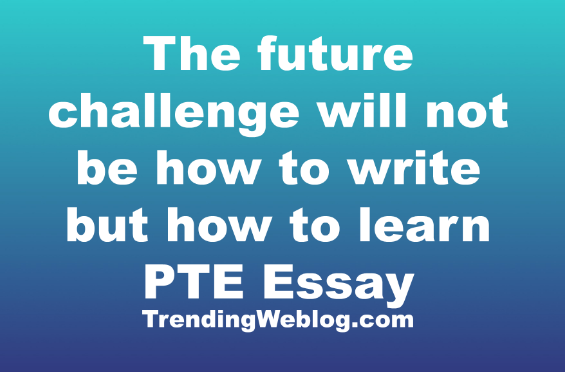 Illiterate of the future would not be one who does not know to read, but people who do not know how to learn.

Complete the topic within 20 minutes. Write a 300-word essay.

Illiterate of future would not be one who doesn’t know to read but people who don’t know how to learn. This statement is quite apt as in today’s modern era we used to call people illiterate so easily without even knowing the root cause of his illiteracy. But the thing is the people are illiterate as they do not have proper resources, they are deprived of basic needs. They are not financially strong so being illiterate is not their choice, it is their helplessness.

But it is quite rightly said in the above statement that illiterate will be now someone who instead of having enough resources is not willing to know how to learn. In the modern era, we can easily see people who have enough resources but they are deprived of inner willingness to learn.

These are those people whom we should call illiterate because, on one hand, we have those people who don’t know how to read and write just because they do not have enough resources. But on the other hand, people having enough resources are not ready to learn. These people do not even realize that how lucky they are to have all the resources with them that can easily help them to grow to groom.

We can easily see people in small villages and even in urban cities who want to learn who wants to work but they cant as they are not literate and not enough capacity to learn and to work. But we can also see people who are sitting in their offices knowing nothing and not even having any will to learn. So it is the irony of fate that people who have resources are not ready to learn and people who are starving to learn they are not having resources. So it will be quite apt to say that