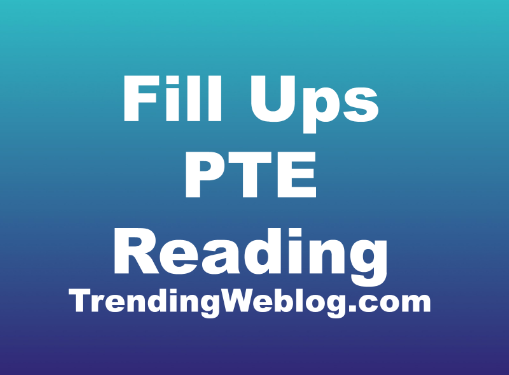 Fill Ups PTE Reading Questions – Solve each question in 2 minutes. The answer will follow after each question. A polygraph machine, also known as a “lie detector,” is a common part of criminal investigations. The instrument is used to measure (1)__________ a person’s body reacts to questions. The theory underlying it is that lying is stressful, and that this stress can be measured and recorded on a polygraph machine.

When a person takes a polygraph test, four to six wires, called sensors, are (2)__________ to different parts of his body. The sensors pick up signals from the person’s blood pressure, pulse, and perspiration (3)__________  the process of questioning, all the signals are recorded on a single strip of moving paper. Once the questions are finished, the examiner analyzes the results to determine if the person tested (4)__________ truthful.

International trade is the exchange of good and services between countries. Trade is driven by different production costs in different countries, making (1)__________ cheaper for some countries to import goods rather than make them. A country is said to have a comparative advantage over another when it can produce a commodity more cheaply. This comparative advantage is (2)__________ by key factors of production such as land, capital, and labor.

While international trade has long been conducted in history, its economic, social, and political importance has been (3)__________ in recent centuries. During the 1990s, international trade grew by nearly 8.6% each year. In the year 1990 alone, the growth in trade in services was as high as 19%.

Today, all countries are involved in, and to varying degrees dependent on, trade with other countries (4)__________ international trade, nations would be limited to the goods and services produced within their own borders. Trade is certainly a main (5)__________ force for globalization. It is also the subject of many international agreements that aim to govern and facilitate international trade, such as those negotiated through the World Trade Organization (WTO).